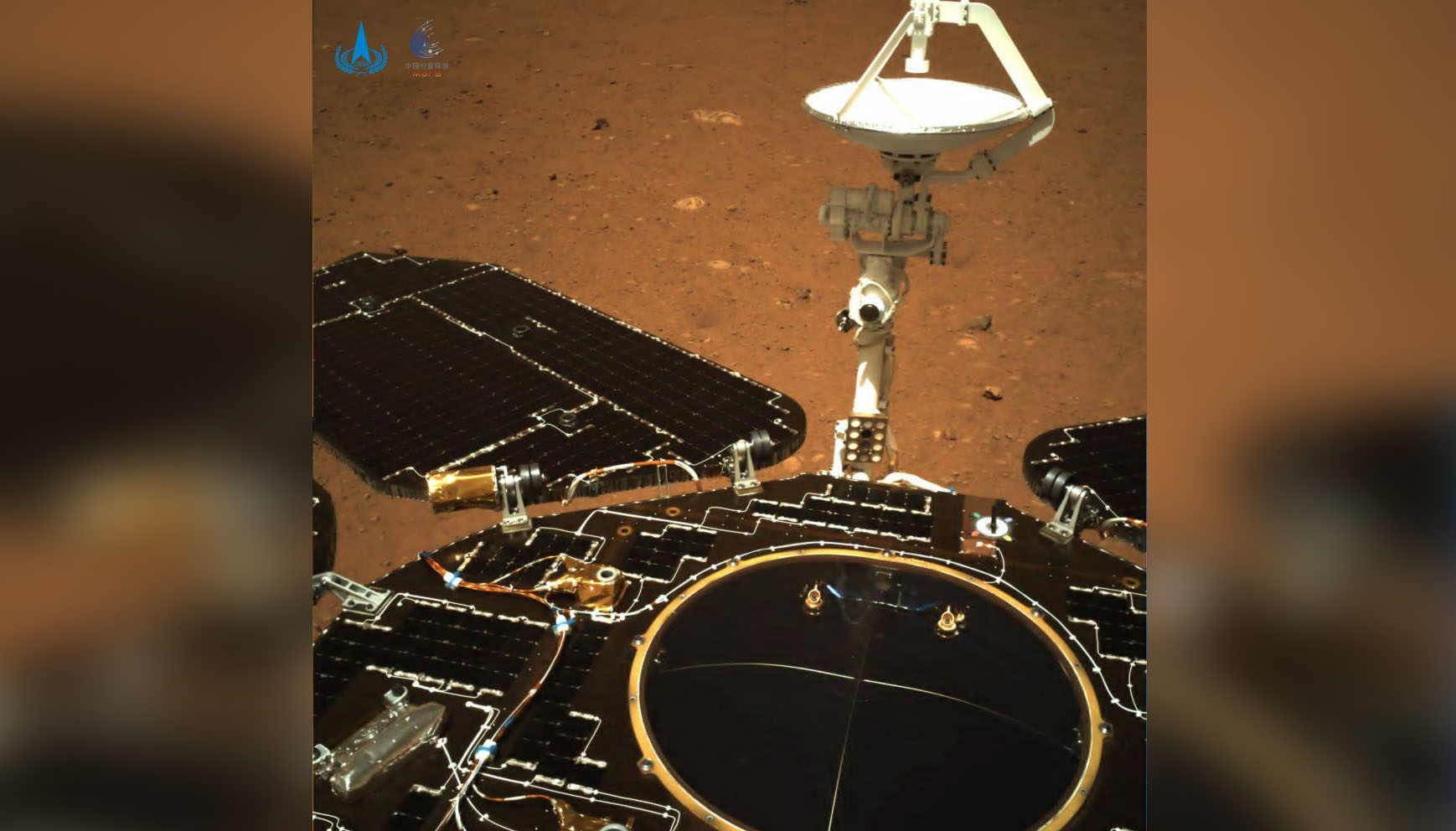 This article was originally published at The Conversation. The publication contributed the article to Space.com’s Expert Voices: Op-Ed & Insights.

China’s Zhurong rover landed safely on Mars on May 15, making China only the third country to successfully land a rover on the red planet.

More impressively still, China is the first Mars-going nation to carry out an orbiting, landing and rovering operation as its first mission.

Planetary scientist Roberto Orosei told Nature China is “doing in a single go what NASA took decades to do,” while astrophysicist Jonathan McDowell described China’s decision to include a rover in its maiden Mars outing as a “very gutsy move.”

Congratulations to CNSA’s #Tianwen1 team for the successful landing of China’s first Mars exploration rover, #Zhurong! Together with the global science community, I look forward to the important contributions this mission will make to humanity’s understanding of the Red Planet. pic.twitter.com/KexElIu8OHMay 15, 2021

Where did it land?

Zhurong, named after the god of fire in Chinese mythology, separated from the Tianwen-1 orbiter and touched down close to the site of previous NASA missions, on a vast plain called Utopia Planitia.

This area of Mars was formed billions of years ago, when a martian meteorite smashed into the planet’s surface. The surrounding area is largely featureless, covered mostly in volcanic material.

Zhurong is not the first rover to explore this region. In 1976, NASA’s Viking 2 lander touched down further north within the Utopia Planitia basin, returning high-resolution images of the martian surface and analyzing soil samples.

The Viking 2 lander lacked the ability to investigate any further than its initial landing site. But the Zhurong rover should be well equipped to roam farther afield during its mission.

What will it do?

The mission’s three-month scientific program will begin once the Zhurong rover disembarks from the landing craft and begins its journey across the martian surface. The 240-kilogram, six-wheeled rover is equipped with six individual scientific instruments, and has four large solar panels, giving it the appearance of a “blue butterfly.”

Zhurong’s design, instruments and technology on board Zhurong are comparable to those on board NASA’s twin rovers Spirit and Opportunity, which touched down in January 2004. Although Zhurong is not at the cutting edge of current space exploration technology, the sheer speed of this program’s development since its initiation in 2006 is awe-inspiring.

Like the many Mars rovers before it, Zhurong will probe this alien planet’s environment, and search for signs of water ice on the surface.

The mission is expected to survey four aspects of its local environment:

Zhurong will thus help build a more complete geological picture of the Red Planet’s history. And, in a genuine first for Martian exploration, it is equipped with a magnetometer to measure the planet’s magnetic field. This is an important study that will help address why Mars has lost much of its atmosphere, leaving its landscape so barren.

The Tianwen-1 mission is just one of an impressive list of accomplishments by the China National Space Administration in the past year. Its other feats include launching dozens of Long March rockets, each with multiple payloads, including that of the Chang’e 5 lunar probe, which brought moon rocks back to Earth for the first time since the end of NASA’s Apollo program in the 1970s.

Last month, China launched the first stage of its Tiangong space station, which next year is set to become the world’s second long-term home for humans in space. The momentous launch didn’t go off without a hitch, however, as debris from the launch vehicle made an uncontrolled re-entry back to Earth, eventually splashing down in the Indian Ocean.

Thankfully no one was hurt in that incident, but it is a timely reminder that China’s accelerating pace of space missions and rocket launches need to be carefully managed.

This year of activity has solidified China’s powerful presence in space, and we are only seeing the beginning of its ambitious future. By 2045, China hopes to become a leading space power, as outlined in the 2018 Aerospace Science and Technology Corporations route map.

In the coming years we can look forward to seeing China launch crewed missions to the Tiangong space station, and in the coming decades can expect to see China join other spacefaring nations in missions back to the moon and Mars.

This article is republished from The Conversation under a Creative Commons license. Read the original article.

Follow all of the Expert Voices issues and debates — and become part of the discussion — on Facebook and Twitter. The views expressed are those of the author and do not necessarily reflect the views of the publisher.

What is Unidentified flying object (UFO)
A unidentified flying article (UFO) is any flying marvel that can’t promptly be distinguished or clarified. Most UFOs are recognized or explored as regular items or wonders. The term is generally utilized for guaranteed perceptions of extraterrestrial shuttle airplane, and was authored as an an-acronym by Project Blue Book project head Edward J. Ruppelt. Numerous UFOs are portrayed as being flying saucers, as is displayed in the picture to one side.

Studies and examinations have been directed by different governments around the world, alongside private people and associations. In the United States, considers started in the last part of the 1940s and have included Project Grudge, Project Sign and Project Blue Book. The last was finished in 1969-70 after the Condon Committee formally reasoned that the subject neglected to justify further examination. In any case, an unpublicized study named the Advanced Aerospace Threat Identification Program was subsidized by the U.S. government from 2007-2012, and a replacement program named the Unidentified Aerial Phenomena Task Force is at present operational.

Unidentified lights and flying items have been accounted for in the skies for quite a bit of mankind’s set of experiences. Doubters including different researchers, and associations like the Committee for Skeptical Inquiry, express that the whole subject can be clarified as ordinary items or wonders, while Ufologists recommend different problematic hypotheses. Public surveying demonstrates an impressive bit of the U.S. populace feels that their administration is retaining data regarding the matter.

The subject of UFOs has been, and is right now, famous in overall culture in anecdotal motion pictures, TV and other media. UFO reports are additionally the subject of proceeding with discussion and news announcing.

Early history before the 20th century
Unexplained aeronautical perceptions have been accounted for since forever. Some were without a doubt galactic in nature. These may incorporate comets, brilliant meteors, at least one of the five planets that can be promptly seen with the unaided eye, planetary conjunctions, or environmental optical wonders, for example, parhelia and lenticular mists. A model is Halley’s Comet, which was recorded first by Chinese cosmologists in 240 BC and conceivably as ahead of schedule as 467 BC. Such sightings from the beginning of time frequently were treated as powerful signs, heavenly messengers, or other strict omens. Some momentum day UFO specialists have seen similitudes between some strict images in middle age canvases and UFO reports however the accepted and emblematic character of such pictures is recorded by craftsmanship students of history putting more regular strict translations on such pictures.

Julius Obsequens was a Roman author who is accepted to have lived in the fourth century AD. The solitary work related with his name is the Liber de prodigiis (Book of Prodigies), totally separated from an exemplification, or edited version, composed by Livy; De prodigiis was built as a record of the miracles and signs that happened in Rome somewhere in the range of 249 and 12 BCE. A part of Obsequens’ work that has propelled a lot of interest in certain circles is that references are made to things traveling through the sky. These have been deciphered as reports of UFOs, however may similarly also portray meteors, and, since Obsequens, most likely, writes in the fourth century, that is, approximately 400 years after the occasions he depicts, they scarcely qualify as observer accounts.

On April 14, 1561, occupants of Nuremberg portrayed the presence of a huge dark three-sided object. As per witnesses, there were additionally many circles, chambers and other odd-molded articles that moved inconsistently overhead.

The 1566 heavenly wonder over Basel was a progression of mass sightings of divine marvels above Basel, Switzerland. Heavenly marvels were said to have “battled” together as various red and torpedoes in the sky. In the fifteenth and sixteenth hundreds of years, numerous pamphlets composed of “wonders” and “sky displays”.

On January 25, 1878, the Denison Daily News printed an article in which John Martin, a neighborhood rancher, had detailed seeing a huge, dim, round object looking like an inflatable flying “at magnificent speed”. Martin, as indicated by the news account, said it gave off an impression of being about the size of a saucer from his viewpoint, one of the principal employments of “saucer” in relationship with a UFO.

In April 1897, a great many individuals detailed seeing “carriers” in different pieces of the United States. Many marked affirmations. Scores of individuals even detailed conversing with the pilots. Thomas Edison was asked his assessment, and said, “You can take it from me that it’s anything but an unadulterated phony.”

20th century and after
The three soonest known pilot UFO sightings, of 1,305 comparative sightings classified by NARCAP, occurred in 1916 and 1926. On January 31, 1916, a UK pilot close to Rochford announced a column of lights, taking after lit windows on a rail line carriage, that rose and vanished. In January 1926 a pilot revealed six “flying sewer vent covers” between Wichita, Kansas, and Colorado Springs, Colorado. In late September 1926 an airmail pilot over Nevada said he had been compelled to land by a gigantic, wingless, tube shaped item.

On August 5, 1926, while going in the Humboldt Mountains of Tibet’s Kokonor district, Russian pioneer Nicholas Roerich announced that individuals from his campaign saw “something significant and sparkly mirroring the sun, similar to an enormous oval moving at incredible speed. Intersection our camp the thing altered in its course from south to southwest. Also, we perceived how it vanished in the serious blue sky. We even had the opportunity to take our field glasses and saw particularly an oval structure with glossy surface, one side of which was splendid from the sun.” Another portrayal by Roerich was of a “sparkly body flying from north to south. Field glasses are within reach. It’s anything but a tremendous body. One side gleams in the sun. It is oval fit. Then, at that point it some way or another turns toward another path and vanishes in the southwest.”

In the Pacific and European venues during World War II, “foo contenders” (metallic circles, wads of light and different shapes that followed airplane) were accounted for and every so often captured by Allied and Axis pilots. Some proposed Allied clarifications at the time included St. Elmo’s shoot, the planet Venus, fantasies from oxygen hardship, or German unmistakable advantages.

In 1946, in excess of 2,000 reports were gathered, principally by the Swedish military, of unidentified ethereal articles over the Scandinavian countries, alongside disengaged reports from France, Portugal, Italy and Greece. The items were alluded to as “Russian hail” (and later as “phantom rockets”) since it was thought the strange articles were conceivably Russian trial of caught German V1 or V2 rockets. Albeit most were believed to be such regular wonders as meteors, more than 200 were followed on radar by the Swedish military and considered to be “genuine actual items”. In a 1948 highly confidential report, Swedish specialists informed the USAF Europe that some with respect to their agents accepted these specialty to be extraterrestrial in beginning.